Two brothers constantly enthralled in battle with one another, one the god of thunder, the other, the god of mischief — who wins? You do, when you play Viking Gods: Thor & Loki slot from developer Playson, a slot that echoes one of pop cultures closest relationships in all its glory – which is now available on this best bingo online site!

This Norse-themed slot machine is full of hidden gems, the kind that only dedicated players will discover through repeated spins and big bets, don’t believe us? Ask anyone who’s spun here…

Viking Gods: Thor & Loki slot is a 5 reel by 15 payline sort of slot machine, one that you can play from as little as 30p a spin up to £105 depending on how one likes to spin. It goes without saying, but if you are fan of the hit Marvel movies, then you will definitely find familiar ground here in one of the best slots to ever come from Playson — that’s right, we said it! Be sure to keep reading to learn more!

Compared to other online developers, Playson is considered somewhat of a new kid on the block, a developer known for countless extensive slot experiences — such as Viking Gods: Thor & Loki slot, the game in question we’re reviewing for you today. This Malta-based developer has well over 250 staff members, spread out across multiple offices across the globe, each working on the future of the industry.

Almost all of their latest slot machines are mobile-compatible, meaning you can spin them pretty much anywhere you desire, which definitely works in your favour when you think about it. On average, you’ll find that their games fill that medium to high variance gap in your life. Be sure to check out the following online slot games if you want to keep the good times rolling:

Welcome to Asgard — or somewhere that bears quite a striking resemblance to Asgard… In Viking Gods: Thor & Loki slot you are taken to a wintery viking settlement where you are tasked with matching a myriad of different icons on the reels, each as distinct as the last. This is one of the better Thor-themed slot machines in the market right now, which is definitely saying something given the popularity of the theme in recent years.

To spin Viking Gods: Thor & Loki slot all you need to do is select your starting bet from the bottom of the screen using the plus (+) and minus (-) icons to adjust your bet until you are satisfied with the amount presented on the screen. Know that the fortunes favour the bold here in Viking Gods: Thor & Loki slot, meaning you will earn more by playing on a higher bet — you can spin up to £105, so there’s plenty of ways to play…

Feast your eyes on the reels, this is where all sorts of icons live, all just waiting to be matched! Symbols in Viking Gods: Thor & Loki slot are combined in as few as three symbols in the winning line up to five. Each icon you see on the board will net you something different as far as scores go. On the reels there is a nice mix of low and high value icons. The stones you see are all low value icons, finding these symbols will add to your scores in small doses. 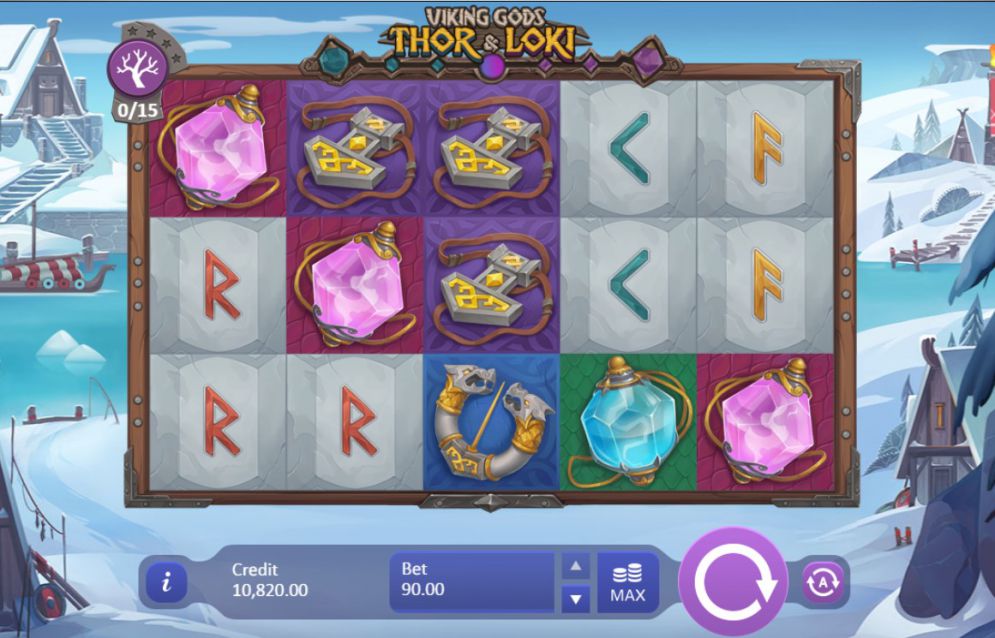 If you care about making some serious cash in Viking Gods: Thor & Loki slot then you should be looking at the two brothers, both are bonus icons as well as some of the best scoring symbols on the board. Before we touch on those icons, let’s first talk about the pink and blue crystal symbols. Finding five of these icons in the same payline will net you 16.6x your stake just like that!

Now, onto Thor and Loki… Both of these symbols are essential in triggering the two big bonuses here. Simply match either of them in the middle reel and you’ll find that more wild icons are added to the board. Wild symbols will substitute icons when found too by the way, replacing everything with something new aside from the Loki and Thor symbols.

Another feature known as the Thor free spins feature will net you 10 free spins simply for activating, Be sure to look out for the serpent wild here in this bonus. Matching this slippery fella will do wonders to your bottom line. It’s possible to advance to different levels in this bonus as long as you continue to match the blue crystal icons here in this bonus. Did we mention that wilds expand with this bonus too? No, well now you know!

The Loki free spins bonus is a little different and is triggered in the same way the Thor free spins incentive is also — which you get is left up to chance. 10 Free spins are awarded again, only this time the wolf wilds will remain locked in place rather than expand when combining icons around them.

Collecting the pink crystals in this bonus will advance you to higher levels. Get all the way to live 4 and you’ll have additional sticky wilds to play with! More on slots gameplay, bingo games lingo and other topics at Umbingo! 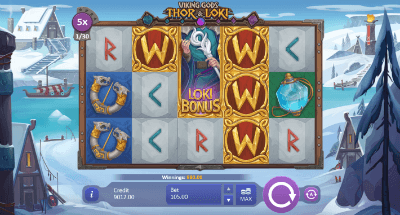 Viking Gods: Thor & Loki slot is as simple as it is strong in all the right places. This is an incredibly accessible slot machine, one that you can recommend to newbies and veterans alike. Playson has done an incredible job in not only the look, but the feel of this slot machine.

Yes, Viking Gods: Thor & Loki slot is a slot that Marvel fans will instantly attach themselves too, but it’s definitely worth checking out even if you don’t like those movies, trust us. If you enjoyed this game, then you will definitely also like Afterlife Inferno slot!