Lovers of slots with a back story and some fast paced action will feel right at home with Joker's Jewels and some online bingo right here on Umbingo one of the best online bingo sites.

Joker's Jewels by Pragmatic Play is a simple 5 reel, 5 payline jester-themed slot with an autoplay option as the only feature. This slot is available on all devices and is playable from 5p and £25 per spin.

Pragmatic Play is a Malta based developer founded in 2015 but is really the embodiment of variety in the casino business. This company has been considered as one of the fastest growing companies since they launched and this is noticeable from some awards they pick along the way such as winning the Rising Star category at the EGR B2B Awards, 2017.

When it comes to legitimacy and integrity, Pragmatic Play have licenses to carry out gambling activity from almost everywhere from Malta to the UK and other places most notably the Bahamas and Denmark where they are among the first with such permits.

The pragmatic approach is all about developing 2 games per month which are thoroughly tested before release and hence the reason for such a young developer having a vast catalogue of slot games such as: 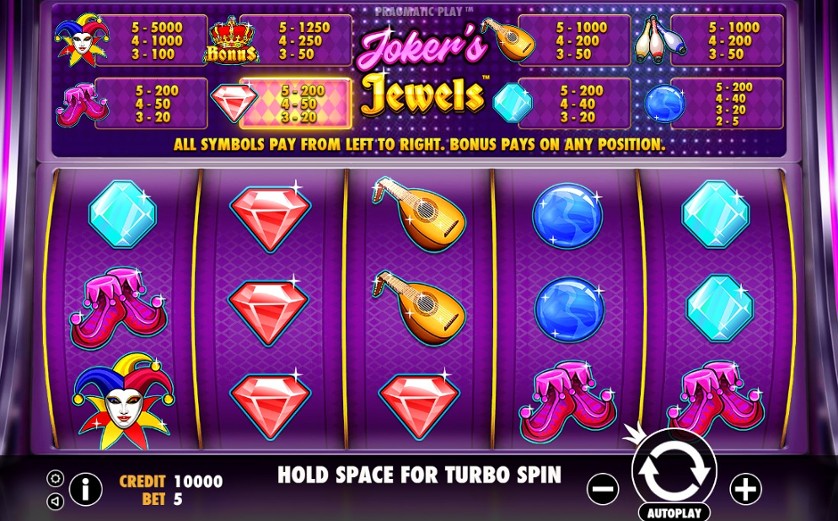 It doesn’t get simpler than Joker’s Jewels here on Umbingo, maybe some classic bingo games online. On the purple reels, expect a selection of red, light blue and dark blue gemstones, juggling clubs, the lute, Jester’s bell-capped boots, and Jester himself as the highest paying symbol. Land a winning combination of 3, 4 or 5 Jester symbols and get yourself a sweet payout of 20x, 200x and 1000x your stake.

The lute and juggling club are also high value symbols with decent payouts of up to 200x your total stake. Joker's Jewels also has a scatter in the symbol of a crown that when 3, 4, 5 of the same are aligned on the reels rewards you with 10x, 50x or 250x your stake respectively.

It is important to note that the dark blue gemstone, which can be considered as a low value symbol in Joker's Jewels, can pay out your stake by landing a combination of just 2 of them on any of the 5 paylines on the reels.

Joker's Jewels also has an autoplay option that can be set to various stakes across paylines and limit the number of spins. Ironically, Joker's Jewels has no wild nor any bonus features for that matter, it is a slot game in its purest form. 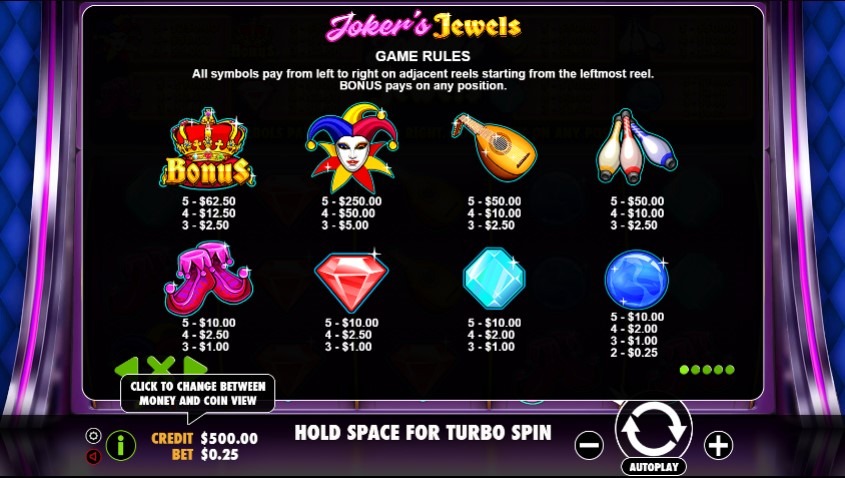 Our Verdict on Joker's Jewels

Joker's Jewels is a classic slot that is not overloaded with the extras and having it on autoplay while you check out some of the online bingo promotions on Umbingo works out just fine.

That said, Joker's Jewels still offers a decent thrill to both the casual player with a manageable reel that could reward you with up to 1000x your stake line, which is pretty good payout of a 96.50% RTP. While you are here, why not give the wheels of the Super Heroes slot a spin?