I Am The Law 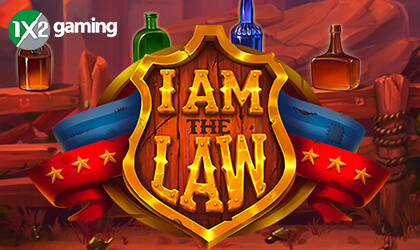 Summary of I am The Law Casino Slot Game

The slot game, I am the law, is based on a Wild West story set during the time of the gold rush, when the law-abiding man was confronting the villain. Find online slot games to play here!

Naturally, the law-abiding man is the sheriff and main character. In this game, the aim is not to search for gold, but instead, to capture the bandits and by ensuring law and order is maintained.

However, this video slot game has a common story with a few supporting characters. You can also check the site's promotions for 500 free spins and no deposit bingo before you play the game.

1X2 Gaming - Developers of I Am The Law Casino Slot

The video slot game I am the Law was developed by the independent UK-based company 1×2 Gaming and some bingo games free.

The company’s head office is in the technological hub of Hove and Brighton, which is also known as Silicon Beach.

The company was founded in 2002 and is also the developer of other known games, which include titles such as:

In addition, there are virtual sports, such as Virtual Champions; Virtual Football Pro; Virtual Soccer; Virtual Euro Legends; to name a few.

Last, the developer has also developed arcade games such as Darts 180, and Penalty Shootout.

About I am The Law and Bonus Features

There are different types of wilds. However, only Sheriff Wilds, which is the lady sheriff, is a paid spin wild symbol.

Sheriff Wilds can be substituted for other symbols, excluding scatters and bonuses, as well as special symbols. However, these wild symbols have the opportunity to expand, as well as cover the whole reels.

The Bonus Badge is a scatter that will give player access to the huge casino bonus within the game if appearing on the first and fifth reel.

This gives the player six chances to win. However, besides this, the wanted posters are also scattered. These scatters can trigger 10 free spins.

These symbols need to appear on reels one, three, and five. More so, these free spins cannot be retriggered.

Another symbol to watch out for is the moustached outlaw. This grim-looking character only appears during a free spin, but can pay 40 times the bet amount if there are five of a kind.

Before being able to collect this character, the player will need to have the lady sheriff, as well as other outlaws landing on the same free spin.

Every outlaw will reward the player. A coin wins equal to four times the total bet amount at the end of the feature.

You can also try your luck a high replay game like Irish Luck slot game.