Originator slot developers EyeCon have delivered another one of their iconic cute and cheerful slots in the form of Cupid’s Arrow, a Valentine’s themed slot that we think you will fall in love with. Try some of our free no deposit bingo too!

With five reels and 25 paylines, as well as cool bonus features, this is definitely one of the best online slots in the cartoon-ish domain we’ve played recently.

With tonnes of cool ways to win, including a couple of cool mini-games hidden inside, this has the potential to be a real classic. Play it today at Umbingo a free bingo online site.

Eyecon - the Developers of Cupid’s Arrow

Australian developers EyeCon have been around almost as long as any casino slot games developers. Formed in 1996, the Brisbane-based team initially started producing regular video games, but soon discovered that their real skill-set lay in the realms of online casino, particularly slots! So, in 1999, they began to take virtual casinos by storm.

Since then, EyeCon have gone on to produce some of the best online slots ever made, including Fluffy Favourites, Beat the Bobbies and Shaman’s Dream. These are just some of the many light-hearted, cartoonish games Eyecon have produced over the years, and this aesthetic has become a bit of trademark for them.

Cupid’s Arrow continues this theming and we love them for it! Plus, you can play it on any smartphone, tablet or desktop computer through Umbingo.

Set up in the clouds in a heaven-like place, Cupid sits next to the reels which deliver a range of romantic symbols including boxes of chocolate, bouquets of flowers, harps, wreaths and teddy bears.

However, the best symbols to look for are Cupid’s bow or quiver of arrows - these guys will deliver up to 1000 coins if you line the reels with them. Even as little as two in the reels will pay out here.

The wild in Cupid’s Arrow comes in the form of a golden heart. This has the power to replace any of the symbols bar the scatter, but on top of this, will double the payout should it assist you in landing a winning combination.

Occasionally, Cupid will fire arrows across the reels that will bring a payout of up to 100x the original stake, or as many as 10 free spins on the reels. And this isn’t the only way to win free slots too, what a generous game! 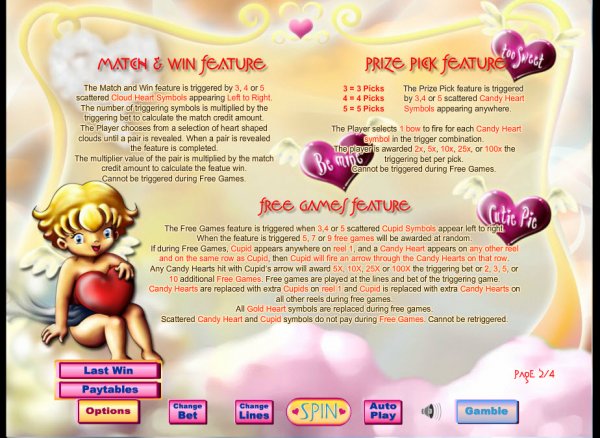 You can win extra cash prizes in Cupid’s Arrow through the bonus features ‘Match & Win’ and ‘Pick’. You can also try some of our online bingo games while you are here.

The ‘Match & Win’ feature is a little mini-game inside, that has the potential to reward well. To access it, simply land three cloud hearts in a row within the wheels. This will take you to a new screen where you simply pick pairs of clouds until you reveal two that show the same multiplier value. Then, you can use that multiplier prize to win.

If these games weren’t enough for you, there is also the opportunity to win free spins on top. Land three or more Cupid scatters and you’ll be entitled to 9 free spins PLUS a payout of up to 25x your original stake. Pretty cool, right? This, on top of the free spins from Cupid’s Arrow make this one of the most generous slots we’ve played in quite some time. 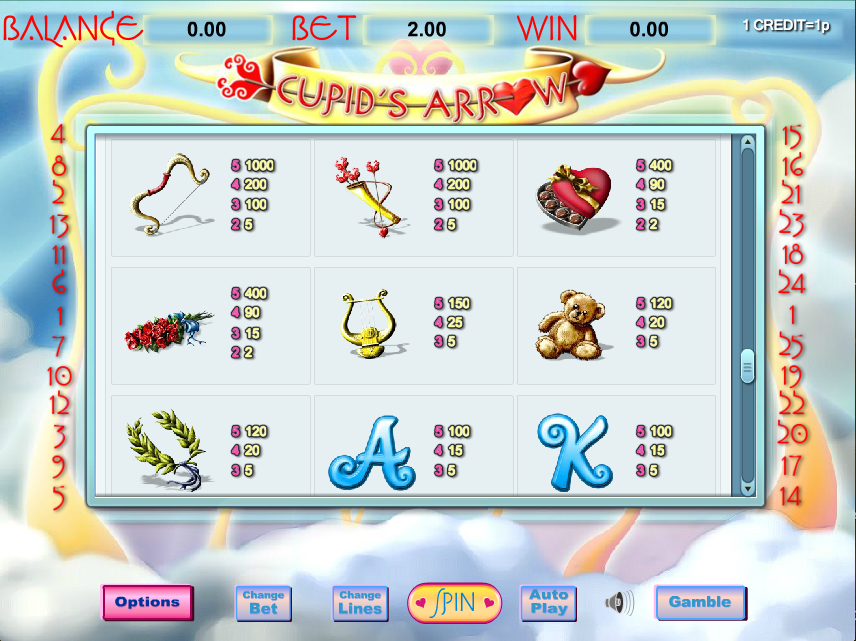 Initially, we weren’t sold on the theming of Cupid’s Arrow put that was purely down to taste. Having got past that and realising that the graphics are great and the game itself even better, Cupid really did help us fall in love with this slot.

With its cute theme and cool free games within, this is not just a visually pleasing game but also a very exciting opportunity to win some money. So, if this cartoon style that Eyecon are oh-so-good at producing is your kind of thing, there’s no reason not to get playing at Umbingo today so try this slot today, or maybe try some of our amazing casino games, like Classic Blackjack.