Valley of The Gods 2

Here at no deposit free bonus bingo casino Umbingo we are always fans of sequels of our favourite online slot games and Valley of the Gods 2 is no exception.

The brainchild of Yggdrasil Gaming, this high volatility bingo video slot continues the fun and excitement of its predecessor, whisking players back to the mystical desert valley where all kinds of mysteries await.

Released on the 24th September this year, all kinds of special features await players, not to mention a whopping potential maximum win of €548,100. When it comes to the number of lines, there are 240 lines, with a staggering total of 20160 possible options. So sign up to Umbingo today to try slot games.

The epically named Yggdrasil Gaming first came to life in 2013 at the hands of former NetEnt CEO, Fredrik Elmqvist. The Malta-based company specialises in providing online gaming solutions, and declares that “Games are our DNA”, adding, “We always strive to offer the best games, innovative mechanics and engaging player experiences.”

The company has been engaged in a number of industry firsts since its inception. These include the launch of its YGG Network Campaigns and its BOOST in-game promotional tools. Yggdrasil has also clocked up a number of milestones during its seven years of existence, with 2020 being a particularly productive year.

It released over 40 new games, including Valley of the Gods 2, received its Isle of Man software license, achieved an ISO security certification and launched brand new mechanics and technology, to name a few. And you can quite easily play bingo games by this developer right here at Umbingo. 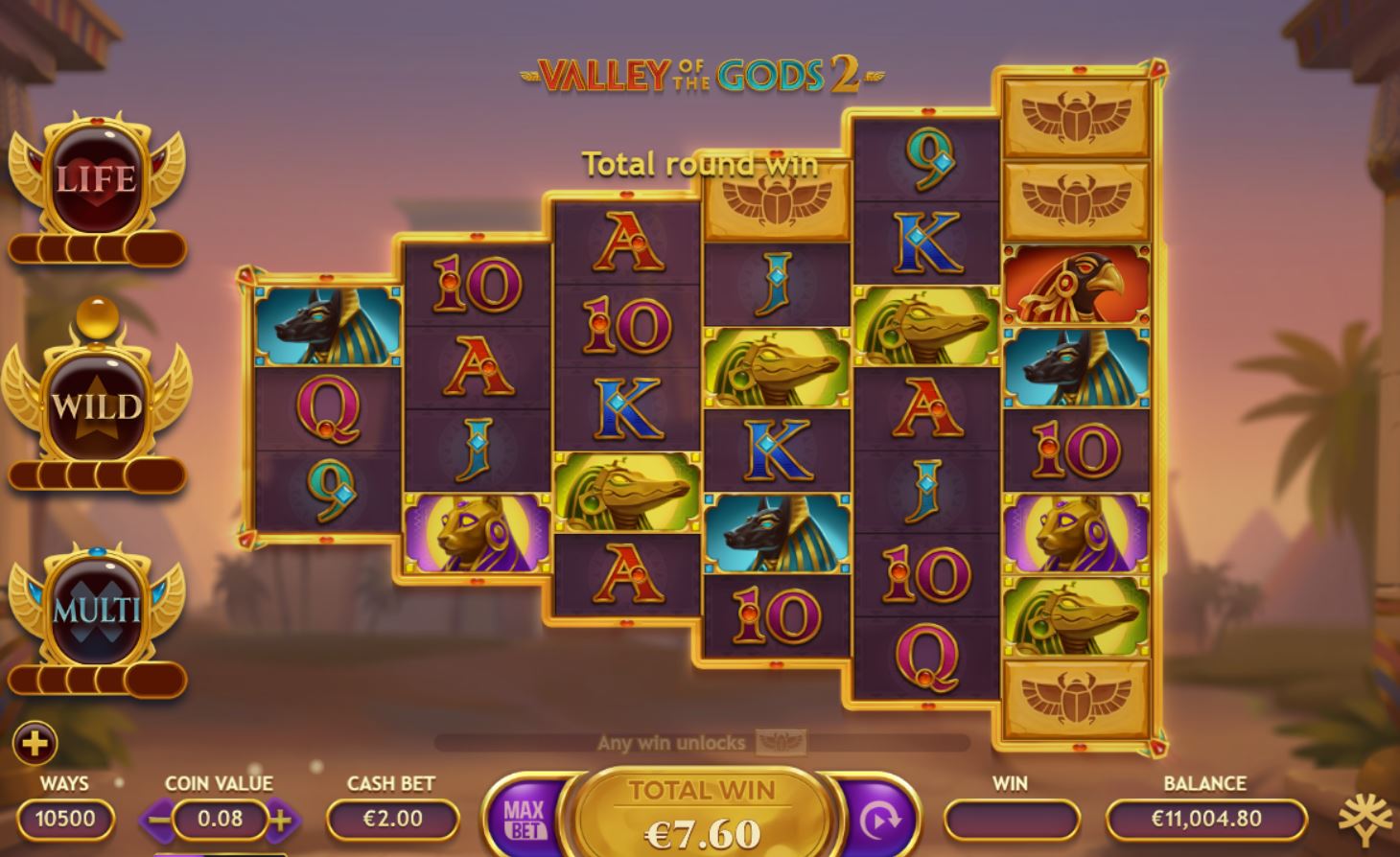 This 6 reel, 240 payline game allows its players to play with as little as 10p and as much as £100 per spin, on all devices, with the aim of the game being to get as many re-spins as you can.

The number of symbols which appear on its 6 reels vary with each reel, and you score a win by triggering 3 or more of the same symbol on each successive reel. Manage to land multiple winning symbols and your prize money will increase.

The reels feature both low value and high value symbols, with the four high ones being represented by the Egyptian gods Anubis, Bastet, Sobek and Horus. Bastet offers the highest value of all. If you trigger 3, 4, 5 or 6 of this symbol, you will receive 2, 4, 10 or 20x your stake.

The game’s Wild symbol is none other than Cleopatra. She fills the whole reel and will stay in place to become part of a winning combination. 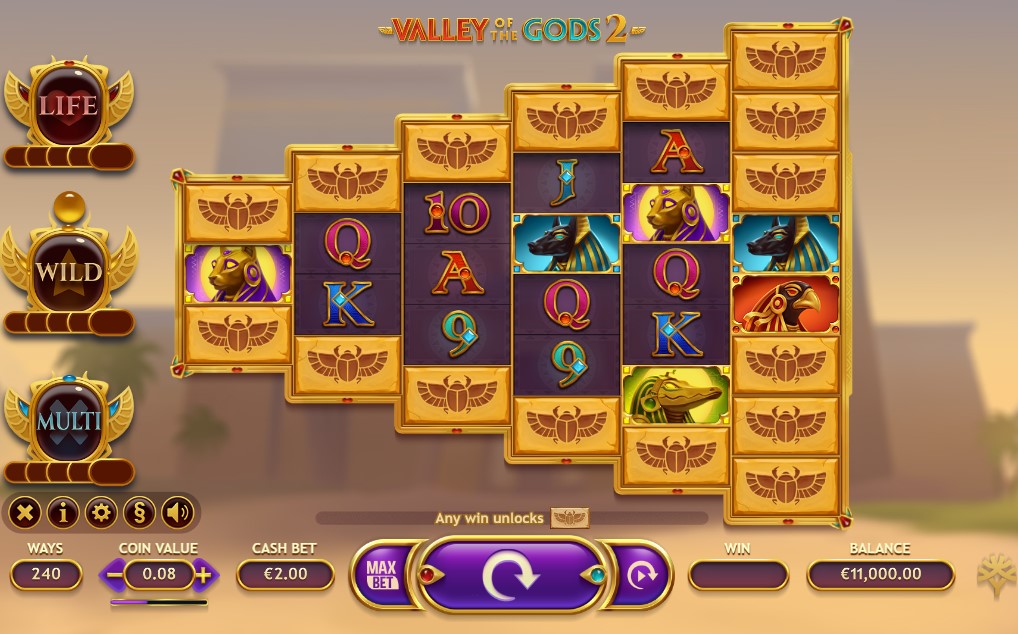 There are a number of extra features available when you play Valley of the Gods 2.

These include the Re-Spins feature, triggered by a winning combination. Winning spins release a scarab beetle which destroys one of 16 blockers on the reels, thereby opening up still more opportunities to win. Once all 16 blockers are destroyed, the scarab beetles will turn yellow, blue or red and you will activate the free spins feature of the game.

Red scarab beetles will grant players extra lives, once you have collected all five of them. For each extra life you gain, you will also be able to turn a non-winning spin into a free one.

Collect five yellow scarab beetles, and they will grant you a Wild Reel. These will remain where they are until you hit a winning combination. When you activate the Wild Reels game feature you are five times more likely to scoop a prize!

Finally, five blue scarab beetles serve as 1 multiplier. The more you gain, the more your multiplier increases, and these multipliers will be applied to the next re-spin. 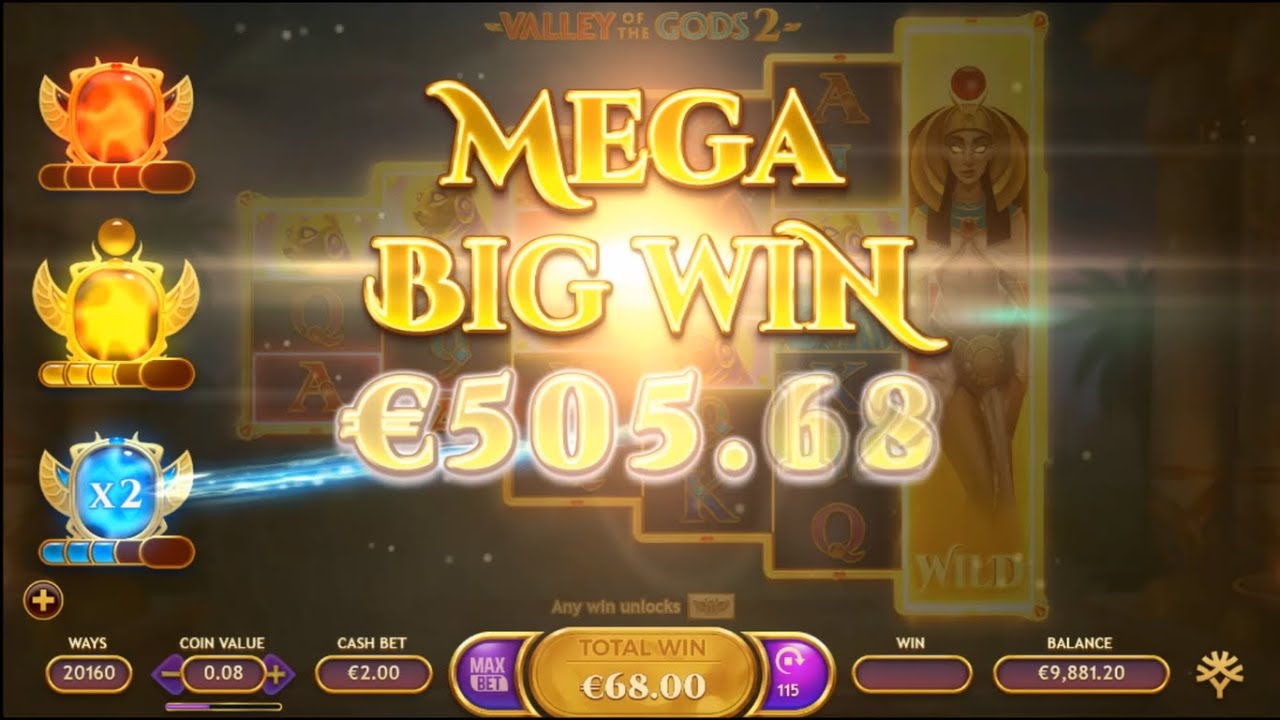 Our Thoughts on Valley of the Gods 2 Slots

Here at Umbingo we feel you can never go wrong with an atmospheric online slot game, and Valley of the Gods 2 is sure to follow in the footsteps of its predecessor, with its dramatic setting and eerie music.

While it may prove a little confusing at first, there can be no doubt that the sheer number of different ways to win makes it worth a try! For other popular online slot games with a similar theme, be sure to check out the array of Egyptian inspired offerings here on Umbingo, such as Ancient Egypt, Egyptian Fortunes or Star Bounty slot.