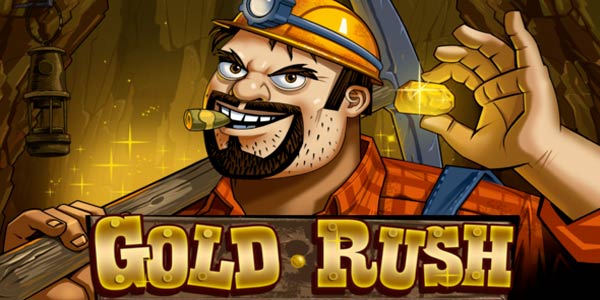 Players better get ready to enjoy a good old mining theme in Gold Rush, a 5 reel, 25 pay-line by Pragmatic Play. In this free slots games to play, players will enjoy features like free spins where you start off with 10 of them, receive an additional symbol in the game i.e. the golden nugget which appears on the reels during the free spins feature.

Every time 1 of the golden nugget symbols land on the reels, they get collected in a meter on top of the reels. The more golden nuggets you collect, the more high-value miner symbols come into play. You can win an awesome bankroll from this slot so go ahead and give it a go for stakes starting from 25p to £250 a spin on all iOS and Android devices.

About the Gold Rush Slot

Gold Rush has a rather good design where the action in the slot is set in a mine shaft. Symbols on the reels include playing cards A, J, K, Q, 10, a lamp, axes and spades, a cart full of gold and a pit pony. The bearded miner pays the highest reward among the standard symbols where 3, 4 or 5 on the reels pay 1x, 8x or 20x your total bet.

The wild in the game is represented by the sticks of dynamite which can substitute other symbols to form winning combinations. The wild can replace all the other symbols except the scatter symbol. The scatter only appears on the 3 reels in the middle.

Every time a scatter appears on the reels during the feature, 2 extra free spins are added to your free spins tally. If you go up a level on your last free spin, 1 additional free spin is yours. Read more about this slot or play at the best bingo site to win now!

Pragmatic Play - The Developers of the Gold Rush Video Game

Pragmatic Play is an online slot and bingo games software company that was established in August 2015. They’ve grown rapidly since then having a workforce of up to 100 employees and their main headquarters in Sliema in sunny Malta.

Despite only having a few years in the industry, Pragmatic Play has earned several gaming awards especially in 2017, when they won the Software Rising Star award at the EGR B2B Awards, later that year they won the Best HR Director, Best Gamified Experience Company and Best Digital Company all at the Malta iGaming Excellence Awards.

The company has endured near misses too like at the EGR Operator Awards in 2016 and 2017 when they were their Hot Safari and Queen of Gold slots were shortlisted for Game of the Year, but they fell short of winning the prestigious prize both times.

Missing an award nomination is devastating, but this earned the company recognition. It grew their client list rapidly over the last few years. They were able to acquire gaming licenses from various jurisdictions around the globe that allow them to entertain players.

The company has acquired licenses from gambling authorities like the UK Gaming Commission, Malta Gaming Authority, the AAMS in Italy, Philippines' regulator, PAGCOR, they are certified by the authorities of Romania and Curacao's eGaming certification body.

They are the first casino slot game provider to be awarded a license to operate in the Bahamas before expanding into Denmark. The Pragmatic Play team is comprised of designers, mathematicians, programmers and audio specialists. The casino games offered by the company are thoroughly tested to ensure that they are safe, non-discriminatory and fair to play.

If the game passes all the strict tests conducted successfully, it is released at every one of the online casinos that offer Pragmatic Play software. Companies that are responsible for testing Pragmatic Play games include QUINEL, Gaming Laboratories International (GLI) and BMM.

You can enjoy 3 reel slots, 5 reel slots, multiple ways to win slots etc. A good slot comes with its own theme and storyline. Theirs includes various themes like adventure, action, Chinese theme, humour, war, racing, Hollywood, Irish theme, Mexican theme, etc. Some of the slots released by Pragmatic Play include;

Remember that you can access all these Pragmatic Play slots and more at any of your favourite land-based and online casinos. Be on the lookout for the Pragmatic Play collection to see what you find.

Gold Rush is an easy slot game to play, but it can be quite a volatile one. Players may experience some lengthy spells where you receive little wins in the way of gold. If you collect lots of nuggets during the Free Spins feature then you will send up stacking those coins quickly.

The free spins feature offers players up to 10 free spins where the special golden nugget symbol appears on the reels to elevate your winnings. When the golden nuggets land, more high-value miner symbols come into play.

The online slot has a medium to high variance. Pragmatic Play has set the standard when it comes to high-quality design, easy gameplay and a solid bonus feature.

Gold Rush makes for an enjoyable slot game to play and will easily be a favourite among beginner slot players ad punters who love the mining theme. Look for it on any of your favourite online casino slot sites among the Pragmatic Play collection. Join and play their games with our slots and bingo no deposit offers!