Slingo Originals have had success in the past when merging their Slingo games with popular slot games. Slingo is a clever brand that combines slot and online bingo games for those who do not know.

Slingo Reel King is a 75 ball game of bingo, merged with the Reel King slot game from Inspired Gaming. It takes place on a 5x5 grid with medium variance. The betting range is set between 20p and £25 per spin, and the RTP rate is 95%, like it is in most Slingo games. This slot features the blockers and wilds found across other Slingo titles and the Reel King bonus from that slot game. Make sure to read the review at Umbingo or view here instead.

The Slingo Reel King slot logo is the titular character, and he has a big presence throughout the game. Design-wise, there isn't much else that the developers could do to beef up this slot. The reels are coloured a deep blue, and the symbols need to be numbers from 1 to 75 to make them part of a bingo game.

A dome full of balls sits to the right of the reels, but other than that, there isn’t much to talk about regarding the Slingo Reel King slot theme. The developers do their best with what little they can.

Speaking of the developers, this slot game is brought to us by Slingo Originals. They are a studio that is used to creating new spins on their classic Slingo formula. Therefore we can trust them when one of their games looks a bit underwhelming. Their previous Slingo games include the like of: 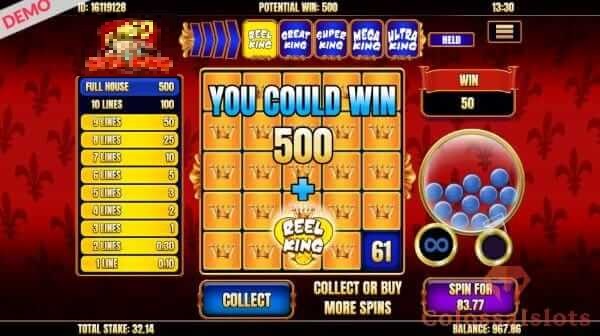 Here at Umbingo, we have hundreds of slot games ready to play, including Slingo Reel King slot. The game is relatively easy to find on our site, head to the slots library and click 'Play Now'.

First, though, you will need to register an account with us. The process takes less than five minutes and can be completed by doing the following:

New players that deposit £10 on sign-up will also be allowed to spin the Mega Wheel as part of our welcome offer. Spin the wheel and try and win up to 500 spins to use on the Safari King game (Full Ts & Cs Apply).

When you are ready to start playing Slingo Reel King slot, hit ‘Play Now’ to open up the game. The idea behind Slingo is matching horizontal, vertical or diagonal lines on the reels to the five numbers on your Slingo card. Matching a line is called a Slingo, and you will have eleven spins to create as many Slingo’s as possible. To start playing, you must: 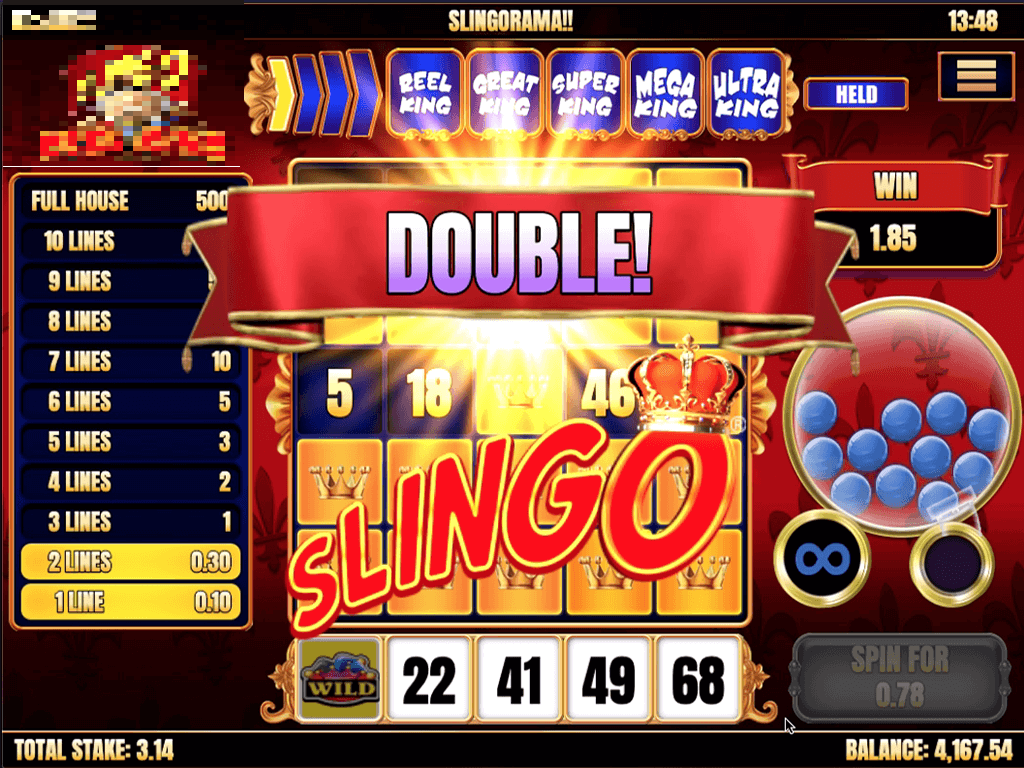 Slingo games do come across as odd in the stats section of most reviews. This is because of the hybrid between slot games and bingo games, and Slingo Reel King slot is no different.

First things first, the RTP rate is 95%, standard for a Slingo game. This RTP rate is lower than the average for an online slot game but much higher than what you can expect from a bingo game. It shows us the deposit amount we can expect returned throughout a game of Slingo Reel King. For example, players who deposit £100 into the game will likely receive £95 on average.

Variance dictates the frequency of winning pay lines in a slot game. A medium variance slot game, such a Slingo Reel King, will have pay lines regularly; only their amounts will vary each time.

For more stats about Slingo Reel King slot, check out the table below.

All values are subject to change at any time.

As with the game’s stats, the Slingo Reel King slot bonus features will be familiar to Slingo player’s, with one big twist offered from the Reel King part of the game. These bonus features include:

Players that have played the Reel King slot before will be used as the bonus trail mechanic. Other than the logo, this is the only feature borrowed from said game.

Slingo Reel King slot does exactly what its title suggests. It perfectly merges the Slingo gameplay with that of the Reel King slot from Inspired Gaming. Players that have tried both will find it a pleasant hybrid. Anyone unaccustomed to either title can still have fun, but there is more enjoyment to be had when you experience both slot games first.

Try out the Slingo Reel King slot game at Umbingo to see if it is worthy of the Reel King legacy. You can also try other titles from the same developer, such as Slingo Deal or No Deal Slots Machine.

All values (Bet Levels, Maximum Win, etc.) mentioned in relation to this slot game are subject to change at any time.