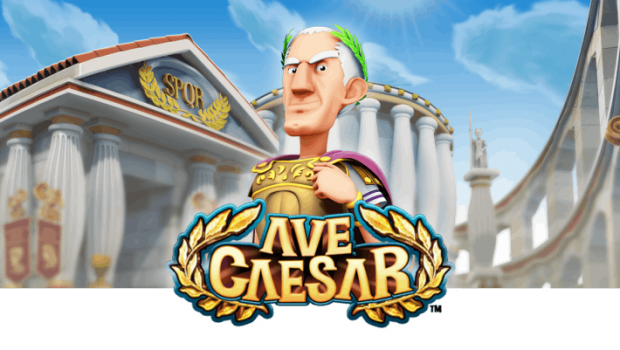 Ave Caesar, an online bingo slot developed by Leander Games, takes the player on a journey to the ancient city of the Romans. It comes with a jackpot and interesting feature that speaks excellence. Like the old gladiator games of the ancient Rome, the slot affords the modern audience a chance to savor the experience. Sign up to Umbingo today to play this slot and check out our 15 free bingo no deposit offer.

It comes with several symbols and features that speaks volume of the setting. It is a plus to the reputation of Leander games, who are known for the best online bingo. And it can be accessed on all devices, including PCs, tablets, and Android gadgets.

The slot is a 5x3 reel, 20 pay line machine that comes with 4 base game modifiers, and about four rounds of bonus. Also, it has an increasing jackpot, which is accessible with 20p and 20euros. The jackpot can be won at random using whichever spin. Read more below, or play online slots now on Umbingo.

Leander Games, the Developers of Ave Caesar casino game is a young but successful iGaming company. Just established in 2008, they have carved a niche for themselves at the top with quality games and slots. The beauty of their products makes them seem like an aged gaming company.

Based in Argentina, they have collaborations and partnerships with top casinos and production teams around the world. Titles from the company can be accessed without download, through browser technology and other downloadable options. Thus, this makes it easy for the best casinos to integrate their products into their catalogue.

However, some of their titles are not accessible to US players, but it is good news for other countries. And it is typical of the developers to have slots with bonus rounds and other exciting features. Some of the free online bingo by the developers are:

You can play all games from this developer or find bingo games here at Umbingo Today. 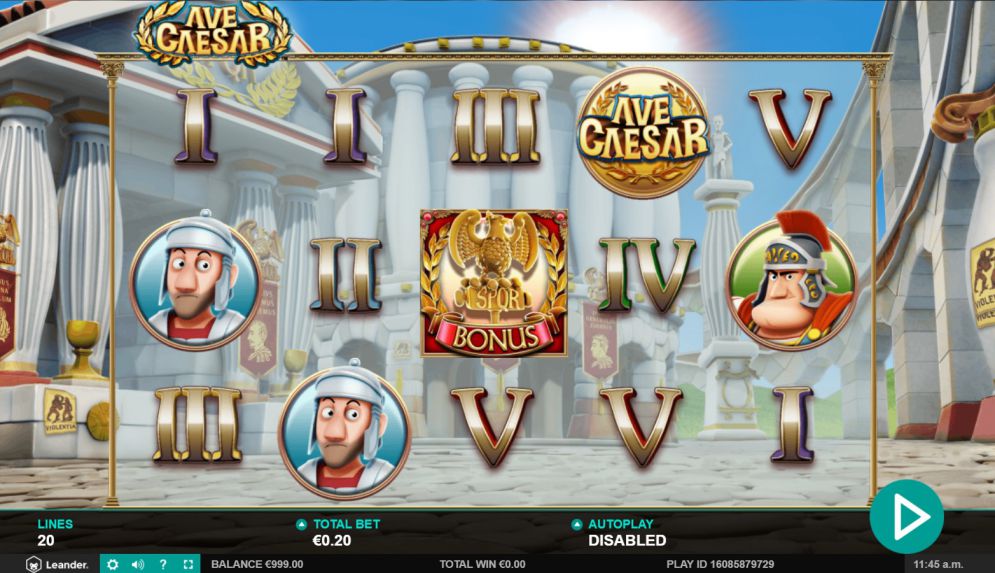 With a 3D display, Ave Caesar is a slot that can be accessed online and on all devices. It comes with a 5x3 reel machine, and a 20 pay line, which can be played with 20p to get bountiful rewards. It also has a jackpot which comes on any spin.

There are wilds and scatters that result in big wins. The wild symbol bringing about 1000x reward, while others come with nice wins too. The women, centurion and legionnaire symbols give between 25x and 300x payback of initial stake.

About 400x reward comes from the game’s logo in a pair of five. There could be dull moments before finding the special features. Hence, a player has got to have the nerves to persist in the search, which ends up being juicy and exhilarating. 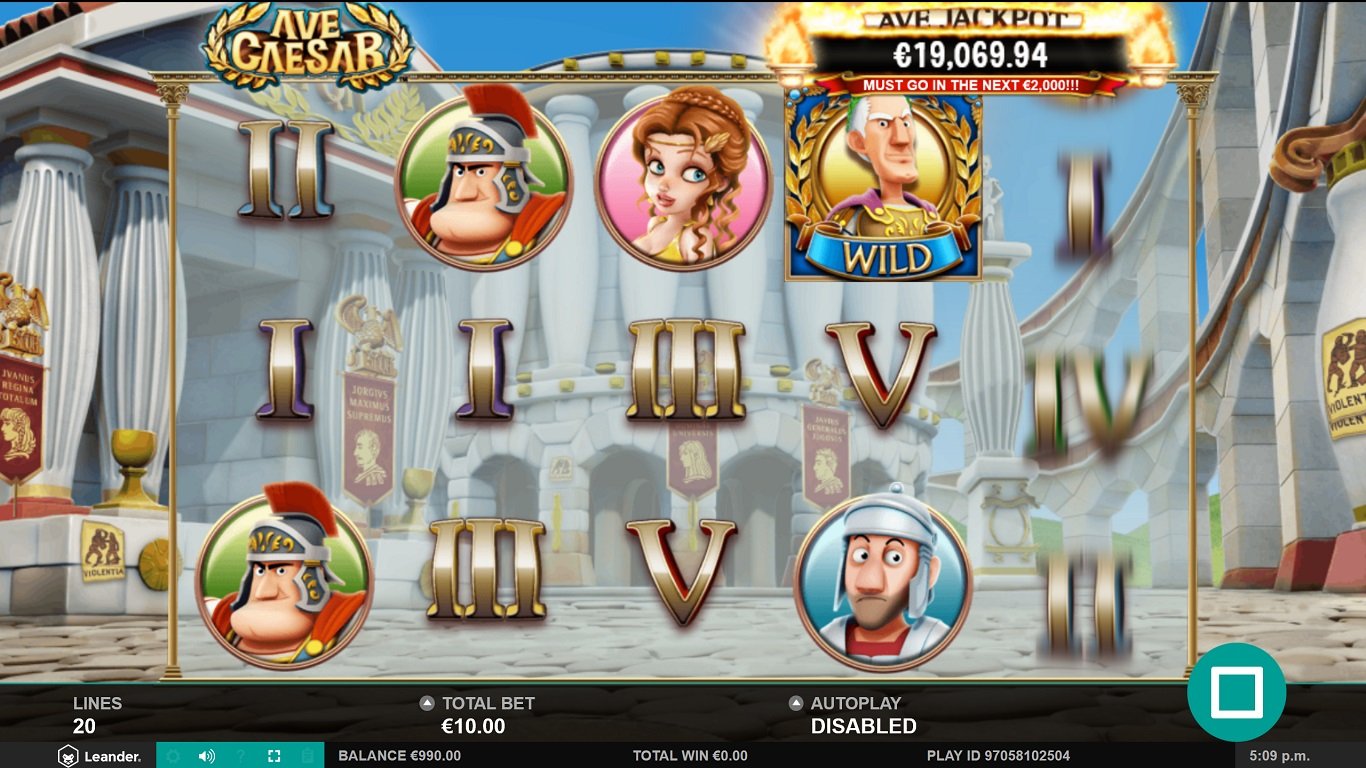 Without mincing words, some of the bonus features which this online bingo offers include:

The well-known warlord can show up at intervals to signal convergence with his horn. As his army of elephant parade, they let off additional wilds. A novel payout is given with the extra wilds added.

When the Gaul symbol appears, other gauls will stone him. Every symbol touched by the stones is transformed into a similar matching symbol, with new payouts given. However, there can be additional multipliers to juice up the reward.

The Caesar symbol appears here and gives about 6 scrolls. Here, either a 5 of a kind win or a huge win or a trigger of 1 of the 4 main bonus feature is behind the scrolls.

A banner is dropped on the reels by soldiers of the centurion at his command. This brings about a 2x2 or 3x3 symbol.

In addition to the above, 4 main feature rounds are made by placing the bonus symbols on reels 1, 3, and 5 on the same spin. Whichever symbol is placed on reel 5 determines the resulting feature:

Hunting for pretty young ladies, Caesar journeys into the tents. His success rewards the players with cash. Persistent pickups can lead to collect.

When your army enters battle on a particular position on the old map, they win prizes as they take over territories. A stop can come to the round only when you don’t have any troop left.

Here, a wild stick to give 3 free spins reward. The maximum free spin is 10, but the +1 symbol can add to the sum every time it lands on reel 5.

Try to trigger the above bonuses on Umbingo today, and you might get really lucky. 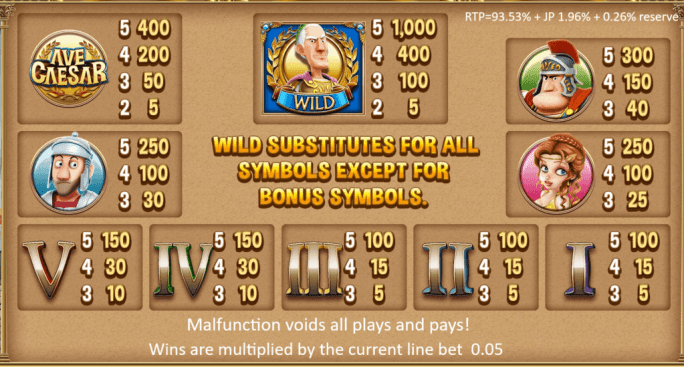 With Leander games, you can always get free bingo online, and Ave Caesar is no exception. It is an exciting game that comes with a lot of rewards for players. Give this game or the Ave Caesar Jackpot King slot a try now on Umbingo slots to stand a chance to win massively.