Asgardian Stones is a Norse-themed slot about Asgard, the dwelling place of the greatest gods of the North Germanic peoples. Slots abound in the iGaming industry possessing themes that express, and emphasize the rich cultures of the Nordic peoples, while also keeping thrilling and fulfilling gameplay.

In essence, the Nordic theme has been a worthwhile path for many developers to tread, as one can neither go out of place with it. The same applies to Asgardian stones, where all there is to do is join the Viking gods on the transmission to Asgard.

This slot is replete with some remarkable features that revolve around the Norse theme. With the Avalanche feature by NetEnt, players are offered colossal wild symbols with a set-up of 2x2 and 3x3 on the reels that result in the Colossal Crush feature.

Going further, more excitement is experienced in the Bonus Wheel and Free Spins features, which altogether offer up to 2,000 times your wager.  You need to delve deeper into the game, so you'll understand how captivating it is. So, read more in the following paragraphs and also play on Umbingo online bingo sites.

Asgardian Stones is an enriched title from NetEnt, one of the gigantic software developers around. NetEnt is one of the developers at the heart of the iGaming landscape, as only a few developers come close to what NetEnt has done.

NetEnt was founded in 1996, from which time it has grown to become a monumental developer. The company prides itself on being a tier-one developer, further cemented by its reputation as the first developer to produce an online slot game.

Having witnessed all stages of growth and metamorphosis, NetEnt has expertly turned its fortunes around by providing operators with relevant titles. Evidence of this is that some games by NetEnt are the most popular slot games of all time.

Some lucky fans of progressive jackpots have indeed progressed by winning some NetEnt's online jackpots games, one of which till today holds a record as the second highest. As a result of the several feats recorded by this developer, industry experts and analysts opine that it is arguably the most successful developer in the industry.

Adopting a business model that favors some other developers, NetEnt has begun acquiring some promising but smaller developers and partnering with others. An example is its acquisition of Red Tiger Gaming, as well as partnerships with some other smaller outlets.

The company has a rich portfolio of games in the online bingo, slots, card games, table games, keno games, and social games categories. Accordingly, some slot games to play by NetEnt are as follows:

You can play the above games and bingo no deposit bonus on Umbingo today. 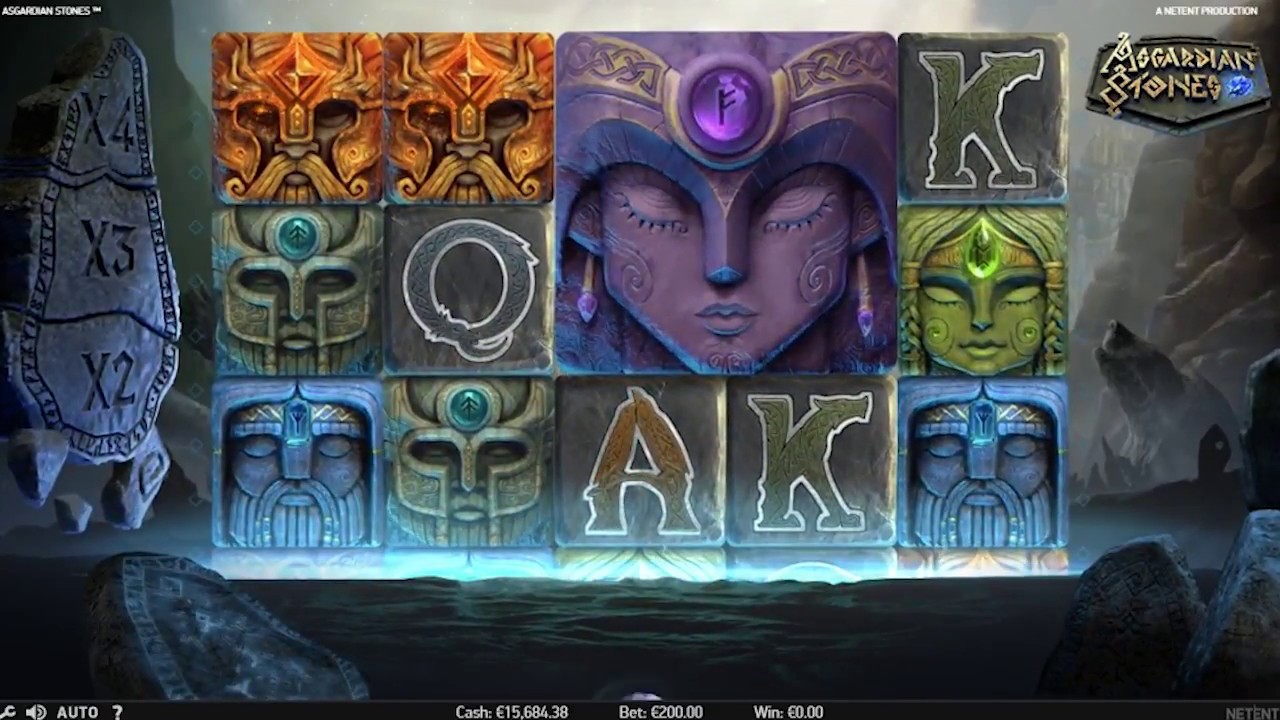 The gameplay is about the Avalanche feature, Colossal Crush, Bonus Wheel, and Free Spins features. All of the gameplay is tailored to provide you with the fun and wins that make up your quest for slot games.

As for the symbols, as usual, there are high-paying and low-paying symbols that pay differently, while also starting some features here. The high-paying ones are the different colored faces of the old gods presented in stones.

Orange Stone god, Green Stone god, Purple Stone god, Olive Stone god, and Blue Stone god are the significant symbols here. The low-paying symbols include card suits such as A, K, and Q. There's the wild symbol represented as W symbol, which replaces all other symbols except the Bonus Wheel symbol.

Asgardian Stones has 5 reels, 3 rows, and 20 pay-lines, and can be played between 20 Pence and 200 Pounds for a spin. You would have more taste of the gameplay when you play new bingo games on Umbingo now.

The Avalanche feature is activated when you make a winning combination using the symbols on the reels. As the feature plays out, all winning symbols rain in from above the reels, explode, and disappear immediately. As they leave the reels, another set of symbols rain in again. This continues until you land sufficient wins in a spin.

This feature is enabled by the appearance of a Bonus Wheel symbol with a 2x2 set-up on the 3rd, 3th, and 4th reels at a time. As it plays out, the Bonus Wheel continues spinning until it offers you up to 5 times your wager in prizes or free spins. This can be offered again until you get a maximum of 36 times your wager.

The Free Spins feature is enabled by the Wheel of Fortune symbol that awards you up to 15 free spins at first. The feature has 3 variants with each variant offering you 5 free spins.  As the feature plays out, the W Wild symbol appears as a colossal wild with a 2x2 or 4x4 set-up. The colossal wild will divide itself into a 1x1 set-up if it's part of a winning combination.

The symbols also leave the reels once they have fulfilled their purpose for showing up. Afterward, all other wilds on the reels become Sticky Wilds all through the feature, only leaving for additional wilds to come in. Re-enabling the feature is possible here up to 3 times with a lot of free spins up for grabs.

You can win all the above bonuses when you play at Umbingo now! 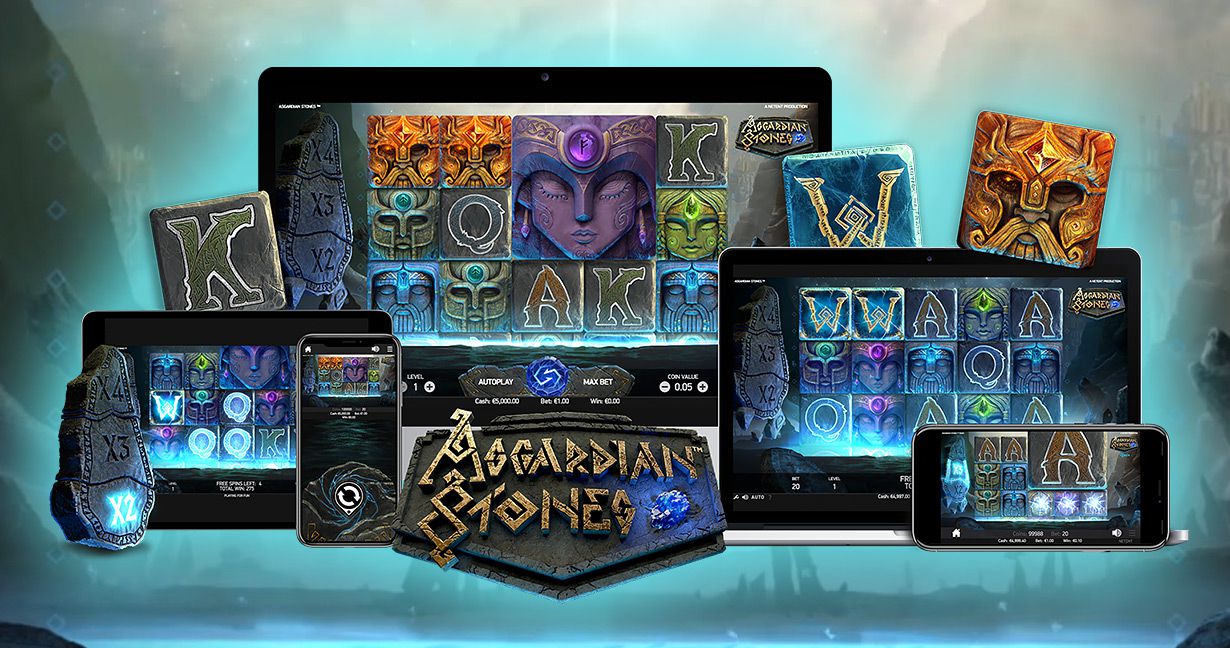 Asgardian Stones has ample fun, thrills, and wins encapsulated in one game. It is a game for both low, medium, and high rollers. So the game has got something for everyone, especially considering that the features are top-notch and the wager limit is quite substantial.

In essence, you have to try your luck on this game as sufficient wins await you. Play the game and other online bingo now on Umbingo and win unbelievably as well as slots, like the Genie 3 Wishes slot!